The Eastern gorilla is the largest living primate, and as a great ape; they are also close relatives of humans.

The Western and Eastern gorillas were previously classified as the same species, although they are more genetically distant from one another than chimpanzees and bonobos are. There are two subspecies of eastern gorilla; the mountain gorilla (G. b. beringei) and the eastern lowland gorilla, or Grauer’s gorilla (G. b. graueri). Both subspecies are critically endangered, but each have their own differing threats. The eastern lowland gorilla is particularly vulnerable to illegal hunting associated with artisanal mining camps and for commercial trade. The mountain gorilla is also vulnerable to the impact of climate change on the forests of the Albertine Rift escarpment; which would lead to the upslope migration of species, as well as changes to food availability and habitat quality. Both species are threatened by habitat destruction, notably for agriculture. Recent surveys estimate populations of this subspecies have dropped 77% in one generation to 3,800 individuals. Conversely, the 880 mountain gorillas are steadily recovering, making them the only great ape taxon that has been increasing in number.

Eastern gorillas live in dense mature and secondary lowland tropical rainforest through transitional forests to Afromontane habitat, including bamboo forest, subalpine grassland on volcanic peaks, swamp and peat bog. Their diet varies depending on elevation and its effect on food availability. They are largely herbivorous, feeding on stems, piths, leaves, bark and occasionally ants. Both subspecies feed almost exclusively on young bamboo shoots when they are in season twice a year. Gorillas at lower elevations have a more diverse and seasonal diet. Both Grauer’s gorillas in lowland forest and Bwindi gorillas are frugivorous. 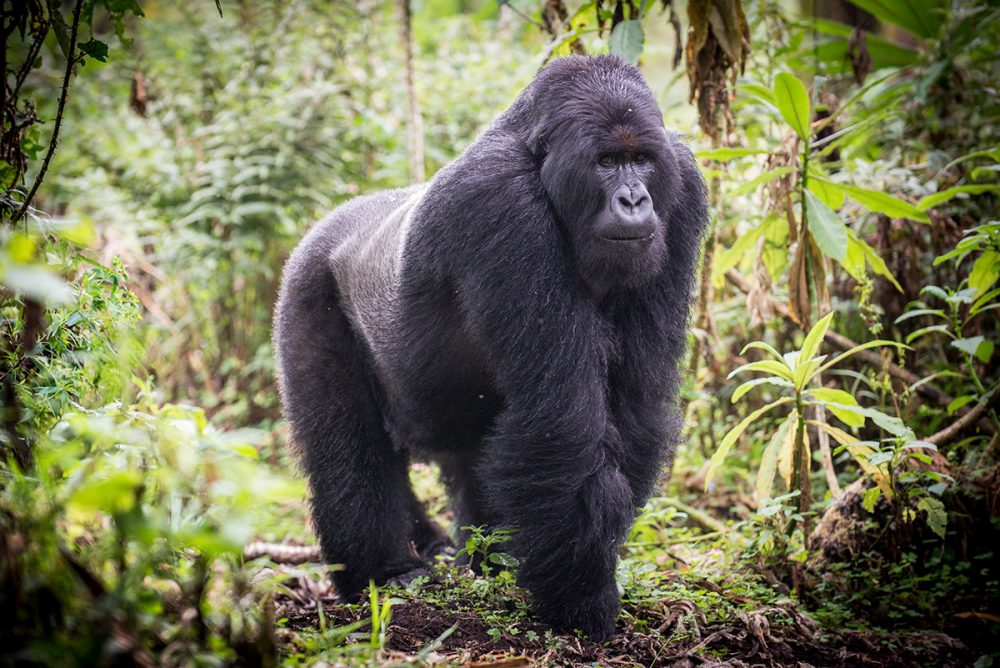