This species is Cambodia’s national bird, and owing to its rarity and exceptional size holds near-mythical status for bird-watchers, naturalists and conservationists. This species’ range is now much reduced; having historically inhabited vast areas of mainland south-east Asia, the Giant Ibis now has an extremely small, declining population, concentrated in Cambodia. It also occurs in extreme southern Laos and has been sighted in Vietnam. Already extinct in Thailand, it is thought to be on the verge of extinction in other localities within its current range. It has been classified as critically endangered based on the likelihood of continuing decline, predominately due to the effects of human disturbance and hunting. Part of their decline may be because of the decline in large grazing animals, particularly wild water buffalo, as these birds rely on the pools and wallows dug by buffalo as feeding sites.

This species is predominately found in northern and north-eastern Cambodia where it has a large range, but is relatively rare. A tiny population also persists in the extreme southern tip of Laos and a 2011 sighting was also reported in Yok Don National Park, Vietnam.

This species is found in the lowlands, living in swamps, marshes, paddy-fields, open wooded plains, humid clearings, and pools within deciduous dipterocarp lowland forest. It is also found along wide rivers. They have a varied diet consisting of invertebrates, crustaceans, small amphibians and reptiles, and seeds. They live singly, in pairs or in small groups, and tend to nest away from villages in deciduous forests located close to grassland pools. 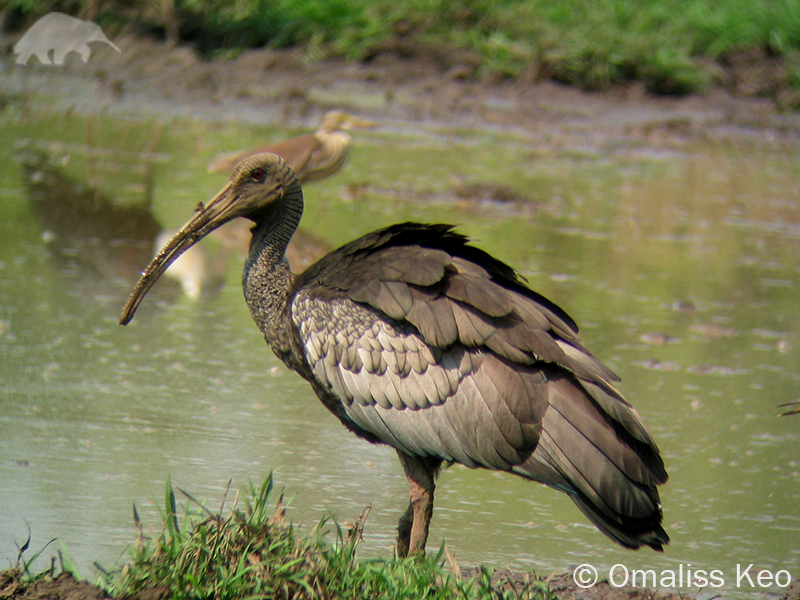 This word cloud shows the main threats to this species. The size indicates the extent of the species’ range that is affected by that threat, and the colour indicates the severity of the threat.