Very little is known about the biology and population of this elusive shark. As it names suggests their pectoral fins are quite long when compared to its closest relative the shortfin mako.

The longfin mako shark is a large pelagic species of shark reaching a length of 4m and is the second largest species in the Lamnidae family, smaller only than the great white shark (C. carcharias). As other members of its family, this species is viviparous with oophagy, where embryos gain nutrients from the females’ unfertilised eggs with a litter size between 2-8 pups of about 92 to 97 cm in length.

Except for in the western Atlantic and probably the central Pacific, this species is uncommon in most of its range. Due to this rarity it is not subjected to fishing pressure, but it is caught as bycatch in longline fisheries for tuna, swordfish and other sharks. Numbers caught as bycatch are inaccurate because it is often misidentified as the closely related shortfin mako shark, and also because landing statistics do not take into account individuals finned at sea and subsequently discarded. The shortfin mako shark has undergone severe population declines in much of its range, and since longfin mako sharks are often caught in the same fishing gear, populations are assumed to have declined. Furthermore, due to this species rarity, large size and low fecundity, it is a concern for conservationists.

There is currently no conservation action in place for this species.

The distribution of the longfin mako shark is still largely unknown but it is assumed to be a global species living in tropical and warm temperate waters.

The ecology of the longfin mako shark is largely unknown. It is pelagic, but sightings at the surface and studies into its diet suggests a greater depth range. As it is an ectotherm species, researchers assume it to be active, although the length of its pectoral fins suggests it to be slower than the shortfin. It is assumed to feed on fish and cephalopods. 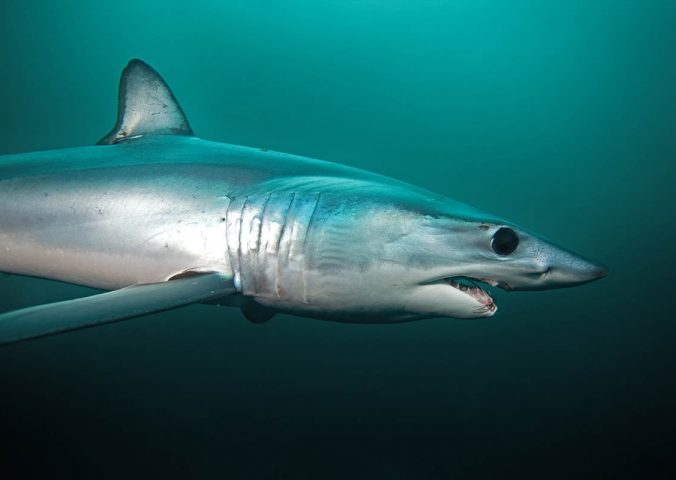