The pig-nosed turtle is the sole surviving member of its entire family, Carettochelyidae, and sits alone on a branch of the tree of life reaching back around 140 million years. That is more than 70 million years before the extinction of the dinosaurs!

This unique freshwater turtle has many unusual morphological, ecological and behavioural characteristics. Unlike other freshwater turtles, the pig-nosed turtle has flippers, resembling those of a sea turtle more than a freshwater species. This strange turtle has a leathery shell, rather than a shell formed of hard, distinct scutes and has a long, fleshy snout with large nostrils, much like that of a pig, hence the common name of the species.

The pig-nosed turtle is a relict both evolutionarily and geographically, with its current distribution reflecting a previous era when Australia was connected to New Guinea. This relict species is threatened by increased demand for individuals and eggs, for both food and the international pet trade. The increased commercial activity across its range in New Guinea is also bringing the species into closer contact with humans. Livestock, feral animals and agriculture also threaten the habitat of the species in Australia.

This species is listed as Vulnerable by the IUCN Red List. However, at the time of writing, the assessment for the species is now out-of-date and requires updating. Not much is known about the several aspects of the natural history and ecology of the species, and further research is required to understand the potential impact of human development. The pig-nosed turtle is listed on CITES Appendix II.

The pig-nosed turtle is distributed across the southern lowlands of New Guinea (Indonesian Papua and Papua New Guinea) and the northeast of the Northern Territory, Australia.

Little is known of pig-nosed turtle ecology. These turtles are omnivorous, feeding on plants, fruit, invertebrates and fish, and will scavenge dead mammals. Pig-nosed turtles have large home ranges and swim using their flippers as paddles, unlike other freshwater turtles.

They do not reach sexual maturity until around 16 years of age, and females lay their eggs in shallow holes close to the water. Fully-developed embryos will delay hatching until environmental cues signal the onset of the wet season, when embryos hatch en masse. 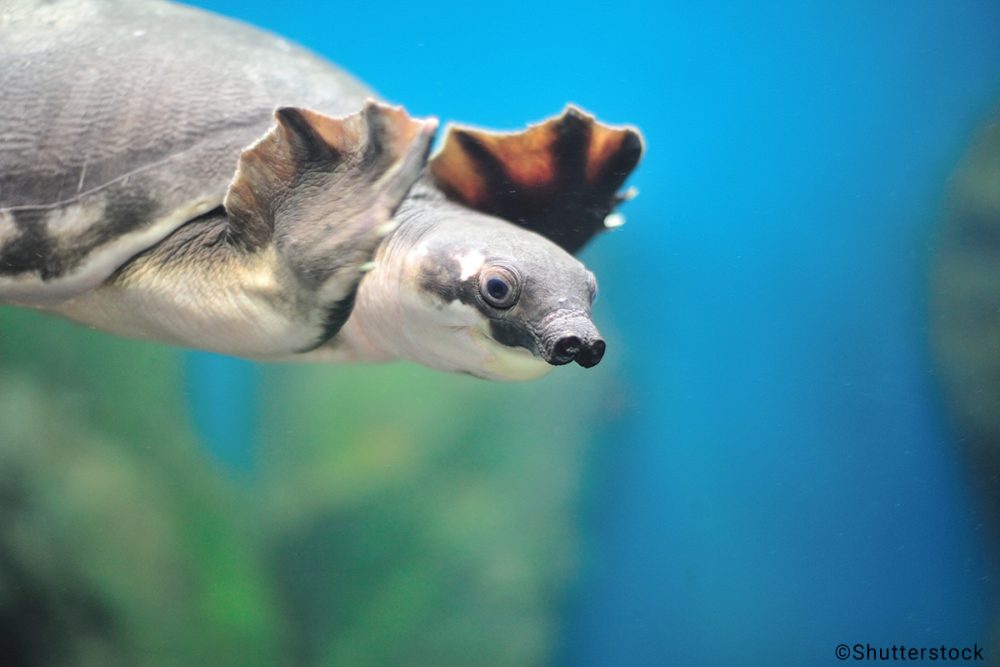