Baird’s tapir is the largest indigenous mammal in Central America. Tapirs are a ‘primitive’ group that resemble the ancestor of rhinos and horses, and have remained morphologically similar for the last 35 million years.

The closest relative to tapirs is actually rhinos, and they last shared a common ancestor around 50 million years ago! There are only five currently existing tapir species in the genus Tapirus, the only genus in the family Tapiridae.

Baird’s Tapir is characterised by a long, fleshy nose, like a shortened version of an elephant’s trunk. This shy and rarely seen mammal lives in the tropical forests and grasslands of Central America.

The species is currently declining primarily as a result of habitat destruction, due to expanding agriculture and mega infrastructure, hunting, and disease transmission from domestic animals. Climate change is likely also causing an increase in the severity of droughts in Mexico’s Calakmul Reserve, resulting in a steep decline in tapir populations. Each of these threats have led to the population being highly fragmented making gene flow between populations difficult. Its low reproductive rate makes it even more vulnerable to these threats.

It is now extinct in parts of its former range, and persists in relatively small pockets of remaining habitat in Colombia, Ecuador, Costa Rica, Guatemala, Honduras, Mexico, Nicaragua, and Panama.

The species can live in a wide variety of habitats, including tropical forests, woodlands, grasslands and marshes. They eat a variety of leaves, twigs, fruit and seeds. Tapirs possess micro-organisms in their guts to digest plant material, and they must eat a large amount of food daily. Births occur throughout the year, with the females giving birth to a single (or occasionally two) young after a 13 month gestation period. They young tapirs stay with their mother for up to 2 years. My name is Esteban Brenes-Mora, a Costa Rican biologist and EDGE Fellow. I will be spending the next two years ... 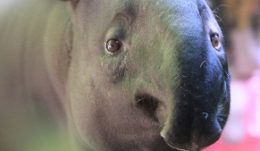 April 27th is World Tapir Day; a day to raise awareness of the plight facing some of the most unique and ... This September, the EDGE of Existence team are looking forward to hosting 7 EDGE Fellows from our 2015-2017 ... Fantastic EDGEy Beasts and Where to Find Them

The magical world looks as diverse and crazy as our own; here are our highlights of Fantastic Beast’s ...

Read moreabout Fantastic EDGEy Beasts and Where to Find Them