This elegant, long-legged bird kills its prey by repeatedly stamping on it.

It has an unmistakable appearance, with an eagle-like body on top of long powerful legs. Unlike most raptors, it is a terrestrial hunter stalking the open savanna or grasslands for one of its many prey species. Despite being predominantly terrestrial, the Secretarybird can soar up to great heights of 3,000m. The Secretarybird consumes small prey whole, even highly venomous puff adders and cobras are killed by several rapid blows to the head.

The species has a huge range across the African continent from as far north as Mali to as far south as South Africa. There have been reports from many of the 36 countries within its range that local populations are in decline. The factors causing this decline are as yet unconfirmed, but habitat conversion and hunting may be threats to the species. This highly distinctive species is widespread across sub-Saharan Africa.

There has been much debate as to whether the Secretarybird should belong to its own separate family, with many people positioning it in the monospecific Sagittariidae. Either way, it diverged prior to the divergence of the other members of the Accipitridae and is positioned at the base of this group in the phylogenetic tree.

Endemic to Africa, found in over 30 sub-Saharan countries from Mali to South Africa.

This species inhabits semi-arid savanna, scrub or grasslands with scattered small, flat-topped trees. It can also be found in open areas within forested habitat. Areas of human development such as fallow fields, airfields and pasture attract the species. They are terrestrial predators, often stalking in pairs, seeking out prey animals on the ground. It has a varied diet, feeding on small mammals, birds and eggs, snakes, lizards, small tortoises, amphibians, insects and crustaceans. 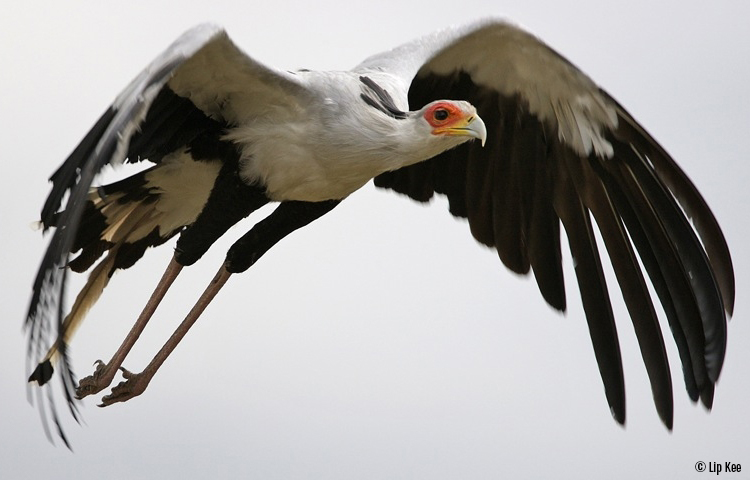 Continuous monitoring, a census and create awareness about species status to ensure conservation efforts are sustainable in the long-term.