Kakapos: The flightless bird whose numbers are soaring The kakapo (KAH-ke-poh) is one of the world’s most ancient bird species, having inhabited New Zealand for millions of years. Unlike many species when humans arrived, this unique creature was thought to be doomed for extinction.

The kakapo is an avian oddity! It is the world’s only flightless and nocturnal parrot: a waddling, ground-bound bird weighing up to nine pounds. Their wings are used for balance and support rather than flapping. They have softer feathers than those of other birds, as they do not need to be strong and stiff to support flight. With a reported lifespan of up to 100 years, the Kakapo is possibly the world’s longest-living bird. 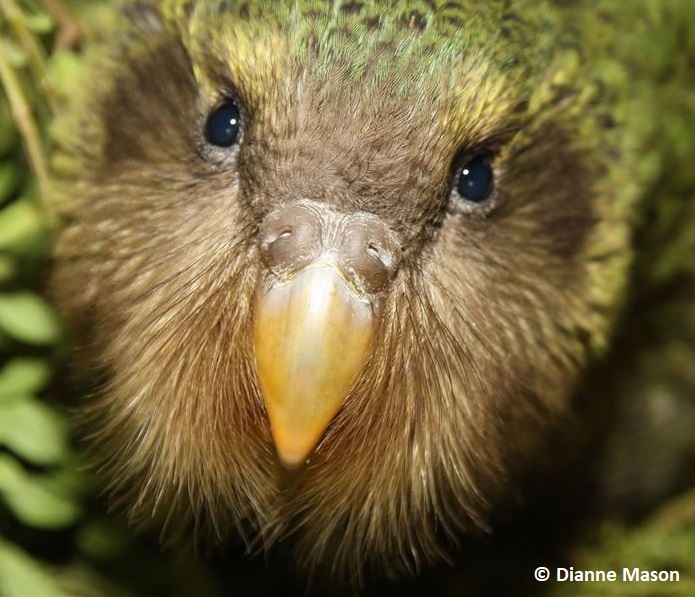 The kakapo’s uniqueness doesn’t end there, their appearance also sets them apart. Adults possess a distinct facial build with owl-style forward facing eyes, and discs of specially textured feathers complete with whiskers and a large grey beak. They have short legs with large blue feet that are strong, making them excellent hikers and climbers, using their wings to help “parachute” back down to the forest floor. This combination of traits that make them extremely distinct among parrots.

As an island species, they originally had few diurnal predators. Kakapos evolved forest coloured plumage for camouflage and when faced with a threat, they freeze, making it difficult for aerial predators to spot them. However, as humans arrived and started clearing large areas of the kakapo’s habitat, and introducing animals like foxes, cats, stoats, and rats, there was a catastrophic decline in numbers, as the kakapo had never encountered ground dwelling predators before. Due to this, it is one of the most endangered birds in the world. Back in 1995 there were just 51 individuals remaining, and they were confined to four small islands off the coast of New Zealand which had been cleared of predators and are now protected areas.

All hope is not lost for this quirky bird thanks to conservation efforts. The Kakapo Recovery conservation program combines the efforts of scientists, rangers and volunteers with the aim of establishing at least two managed populations, and another self-sustaining population in the protected habitat. The team recently announced its second most successful breeding season on record, with the population reaching 216 birds after 55 chicks survived to become juveniles this year. This soars the kakapo’s population to its highest number in almost 50 years! The ultimate goal will be to leave the kakapo to fend for themselves, with the team stepping back from intensive management. With more successful breeding seasons, this is now a real possibility and the picture for this incredible species may not be as bleak as was once thought.

There is now real hope for the long-term survival of the kakapo!